skip to main | skip to sidebar

Its been a while since i blogged so i have a fair bit of catching up to do!!

Following Rangitoto, it was Katja's last day in NZ. She was flying off to Fiji! lucky! After a final sort out she caught the airbus from the Britomart station bound for the airport. It had been great to travel with her for these few days.

I met up with friends from home - Rob and Rach - on the summit of Mt. Eden. Another extinct volcano in Auckland. I had caught the bus from the Britomart and they had walked from Parnell. It was nice to see them again. We caught up over a coffee (pumpkin soup in my case) in a cafe in Mt. Eden shops. It was starting to get dark so we decided to head back to Parnell. The hour long walk took us past the prison and I thought how terrible it would be to be locked up in a country this beautiful. That even we went for a beer in one of Parnell's overpriced bars and discussed out forthcoming trip 'up north'.

I woke up early the following morning and went out for breakfast of eggs on toast. I met up with R+R inside Auckland's cathedral and had a look around. It was a modern building but still had a majestic feel. We took a short walk to the Auckland museum and made our way through the crowds of school kids as we looked at 'ancient' Maori artifacts and experienced and simulation of another volcano eruption in Auckland. I then showed them the Ponsonby district and had a disappointing cake. That evening we had been invited by Shelley to go out for a meal with some of her work mates. Their intern, Eric, was leaving and had suggested we all go to a Vietnamese place. We met in Mac's Bar in Newmarket and had a meal before heading to the restaurant. The lack of a vege option foiled R+R but they ended up ok. I had chicken noddles - it reminded me of my trip to the country and was actually very authentic! I spent the night on Shelley's sofa again, only she had moved house since last time so it was in a different place! 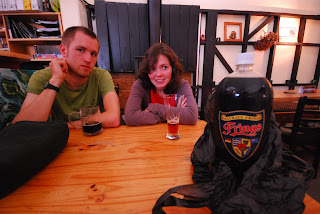 We left Auckland later than planned and headed north on SH1 bound for the Bay of Islands. The drive was pleasent and we stopped for lunch at the Dome Lookout cafe. I cannot remember the exact location of this place but it was south of Whangerai. In the town itself we visited Brauhaus Fings - a micro brewery and purchased a flagon of 'Old Ale' beer to enjoy later. On the way out of town we visited the falls before arriving in Kerikeri and rocking up at an organic citrus farm's hostel. We were greeted warmly by Claus the Swedish owner who had emmigrated here 14 years ago via Florida. It was a lovely hostel with a small 4 bed dorm i shared with another German, Petra, who worked in the town. R+R got a good price on a double room. We cooked dinner and settled around the fire with the flagon.

The next day was 'Christmas'. Claus' partner, Moira, a Scot, did not like the winter without a Christmas so had organized a party for friends. We had just landed in the middle of this but were warmly invited! The only condition was to buy a $5 'secret santa' gift for under the tree and a few nibbles to have with the mulled wine. We spent the morning exploring the coast and climbed St. Paul's head in the north of the Bay of Island which afforded us excellent views. It was very slippery on the assent but worth it. We also checked out the memorial to the Greenpeace ship - The Rainbow Warrior, which was bombed by the French Government killing a photographer in 1985 in Auckland harbor. The wreck was moved up here to be used a dive site. Back in the hostel we had a great party with about 25 locals of all ages. A lovely meal had been cooked with contributions given by all families attending, and we all ate well. A disco followed until the early hours. A fun night! 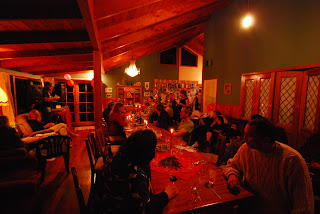 After checking out of the Kerikeri farm hostel and thanking Claus for his hospitality and free mandarins we decided to try and make it to Cape Reinga - The most northerly tip of SH1. After a very long drive we decided to turn around realizing we would not make it to out next hostel before very late. We made it to Kohukohu on the north bank of the Hokianga inlet before nightfall and checked in to the infamous Tree House hostel. R+R had opted to camp despite the waterlogged ground where as headed straight for the dorm! This is a lovely home-built place in sub-tropical woodlands which is owned to real hippy's from Sydney! 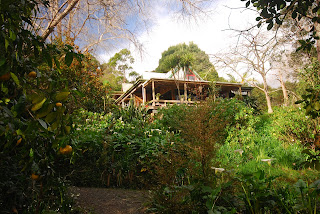 We decided to do some work in exchange for a bed so spent the following morning clearing and area of ground of lilies and ferns and planting a few Paw Paw trees. We also shifted and stacked a pile of fire wood. This was enough to earn us a bed for the night so in the afternoon we explored the tiny settlement of Kohukohu. A chilled out evening lounging on bean bags and reading old copies of National Geographic in the cosy hostel was a good end to the day.

That brings me to today. We tried to get more work, but it was apparently far too wet for us to work outside!! A large tree had fallen down in the grounds the previous night that Pauline had wanted us to clear but she wouldn't let us try due to the rain. We decided to go for a walk in our full waterproofs around the nature trail that lies in the hostels grounds which was like walking though a rainforest! We caught the ferry as foot passengers over the Hokianga to Rawene - a slightly livelier place but still tiny. We had lunch in a pretentious cafe and took a walk on a boardwalk through the Mangroves. We move on tomorrow to Opononi, another small place on the south banks of the Hokianga. We have to leave here because ants have eaten all my food!
Posted by Alex at 10:43

Alex
Im alex, a nomad from birth and the worlds best procrastinator! This blog is about my trip to NZ in 2008 and is basically a diary for my own memories so it reads as a boring list of 'i did this, i did that'. My writing wont win me an award.

Check out these other blogs: